Notes from Joe
· Improving Access to Care While Lowering Costs

Payer Update
· Payer Trends: What You Need to Know

Improving Access to Care While Lowering Costs
By Joe Pugliese

All of the recent news, including the hearings about our potential new Supreme Court Justice, highlight that people are worried, concerned, and fixated on the cost and access to health care and of course, since it’s an election year, people want to know who to blame. The short answer is all of us, but then it gets more complicated.

As the chart below highlights – the cost of healthcare has not slowed down in any detectable fashion. The average premium for family coverage has risen 55 percent since 2008 — about twice as fast as wages, which are up 26 percent, and three times as fast as inflation, up 17 percent over a decade. 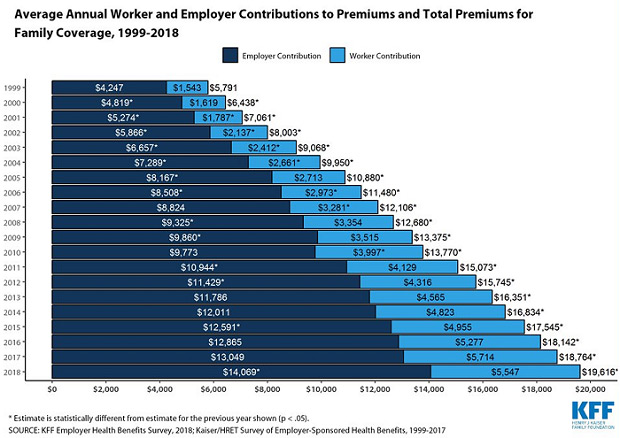 The cost of care raises access issues not just for the hemophilia community but for everyone. Historically the community has focused on access but been silent on the cost of care. I would argue that unless you have unlimited resources (typically expressed as dollars), there is a direct link between the two. It may not manifest itself in your specific situation, but if you spend $1,000,000 when you could have done just as well spending $700,000, someone suffers.

It certainly is not that we do not spend enough money on healthcare; as the chart below shows we out spend everybody by a wide margin. Despite this we get worse results also by a wide margin compared to Organization for Economic Co-operation and Development (OECD) countries, which includes Australia, Canada, France, Germany, the Netherlands, New Zealand, Norway, Sweden, Switzerland, and the United Kingdom. It is not that we need to try to do more with less, it is we should be doing more with the more we already spend. 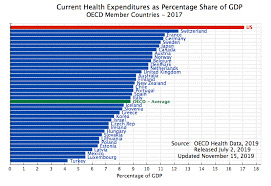 Several years ago, I met with a former Medicaid Director to get advice on how to approach his state to include HTCs as providers. I explained how utilizing the HTC network as one of the pharmacy providers could save the state more than $8 million on 400 patients. Of course, it would also provide much needed funding for the comprehensive care model, which is clearly the gold standard for treating bleeding disorder patients. He said and I paraphrase, “do you know how big my budget was (insert 100s of millions of dollars)? Saving $8 million would not be worth my time.” I think that comment neatly summarizes why we spend so much and get relatively little for the money we spend. The $8,000,000 would buy 400 families of four health insurance for a year. If the hemophilia community paid $.01 less per unit and passed that penny on, we would save $50,000,000 per year or buy health insurance for 2,631 families.

We do not need Congress to pass a bill and we do not need the executive branch to try to impose dramatic new drug pricing policies. What we could do starting tomorrow is insist that patients be able to access treatments at a federally-supported HTC. Today, HTCs have about 20-25% of the market, despite providing clinical care for nearly 100% of the most severely affected patients, and despite the fact that the payer team routinely can show brokers and health plans savings of 20-30% over the specialty pharmacy that is presently shipping replacement product to the patient. If we could simply double our present market, which by the way would help fund expanded staffing and services to benefit even more patients with more bleeding disorders, we could reduce annual costs of care by $80,000 x 4,000 patients or $320 million, which would buy 16,842 families health insurance for a year. We would not have to switch products; we could keep and the strengthen the comprehensive care team that patients rely on for care.

What we DO need Congress and agency policymakers to do is to support the original intent of the 340B program, which is to stretch scarce federal resources and help fund clinical care. For the rest of the year, I’ll share more specific ideas of what we need to be doing. If you have any ideas, please share them with me.

The ABCs of Indirect Cost Rates
By Elizabeth "Issie" Karan

HTCs often inquire with the Hemophilia Alliance regarding what is an appropriate “indirect cost rate.” I put this term in quotations because it goes by many names, facilities & administration fee, overhead charges, etc. Anytime I, as an amateur accountant, confer with true number crunchers, I find it important to make sure that we are discussing the same things. What I mean by “indirect cost rate” is the definition used by the Uniform Grants Guidance (UGG), codified at 45 CFR Part 75. However, what your grants manager, business manager, or pharmacy director means may differ. So, as you have internal conversation, I encourage you to make sure you are discussing the same costs.

As for “indirect cost rates”, the UGG defines the term differently for different types of grantees at §75.414. Major institutions of higher education are defined as those required to use the Standard Format for Submission as noted in appendix III to part 75.C. 11. Major nonprofit organizations are those which receive more than $10 million dollars in direct Federal funding.

For major institutions of higher education and major organizations, indirect (F&A) costs must be classified within two broad categories: “Facilities” and “Administration.” “Facilities” is defined as depreciation on buildings, equipment and capital improvement, interest on debt associated with certain buildings, equipment and capital improvements, and operations and maintenance expenses. “Administration” is defined as general administration and general expenses such as the director's office, accounting, personnel and all other types of expenditures not listed specifically under one of the subcategories of “Facilities” (including cross allocations from other pools, where applicable). For nonprofit organizations, library expenses are included in the “Administration” category; for institutions of higher education, they are included in the “Facilities” category.

Because of the diverse characteristics and accounting practices of nonprofit organizations, the UGG states that it is not possible to specify the types of cost which may be classified as indirect (F&A) cost in all situations. Identification with a Federal award rather than the nature of the goods and services involved is the determining factor in distinguishing direct from indirect (F&A) costs of Federal awards. However, typical examples of indirect (F&A) cost for many nonprofit organizations may include depreciation on buildings and equipment, the costs of operating and maintaining facilities, and general administration and general expenses, such as the salaries and expenses of executive officers, personnel administration, and accounting.

With waning days before the election, all eyes are turning away from Washington and towards the voting booths of Americans across the country. I hope that everyone is getting organized to vote in a few weeks and in the meantime, I’m pleased to provide a brief Washington update:

Payer Trends: What You Need to Know
By Jeff Blake

So, what have we learned over the last few years and what are some of the trends?

If you would like additional information about the HANS PPO Agreement and our payer relations activities, please contact a member of the Hemophilia Alliance Team. We Work for You!!

As announced in August, we have launched our new campaign, Harmony in Hemophilia, aimed at enhancing relationships between our member HTCs, NHF Chapters and HFA Member Organizations. The goal driving our efforts is to facilitate increased awareness of all organizations and positively affect collaboration between the groups.

As a result, I wanted to make you aware of our upcoming first series of joint webinars. On October 21st, the Hemophilia Alliance and HFA held a joint webinar aimed at increasing awareness of both organizations, as well as an overview of Hemophilia Alliance Foundation and The Alliance Pharmacy. The target audience for this webinar was member HTCs, HFA leadership and HFA members.

In addition, on November 5th at 3pm EST, the Hemophilia Alliance will join with NHF to present HTC testimonials entitled “Working with your local Chapter”. Several of our member HTCs have offered to present at this webinar and I’ll be reaching out to them in the very near future to discuss further. Target audience for this joint webinar will be member HTCs, NHF and HFA leadership, as well as members of both organizations.

If you or your Center have any suggestions for future joint webinars, please reach out to me at karen@hemoalliance.org or at 717-571-0266. I’ll be more than happy to discuss how we can make your interactions with your local Chapters more meaningful and helpful to your patients.

As we grow and are navigating an ever-changing virtual world, the Alliance is looking to hire an IT person, who ideally also has some experience in the bleeding disorders community. The position will report to the Senior Vice President of Marketing and Operations. The job description and requirements can be found here. For questions about this position, please contact Sean Singh at sean@hemoalliance.org or 727-388-7326.

We work for you! Please don’t hesitate to contact any of us with any questions or concerns: