Historically, midterm elections have proved difficult for the political party in power. Coming into the 2022 elections, Democrats occupied the White House, narrowly controlled the House of Representatives, and effectively controlled the evenly-split Senate via tie-breaking votes by Vice President Harris. Given the challenging economy and fallout from COVID-19 pandemic measures, many pundits predicted Republicans would gain significant seats in Congress.

Current Outlook for the 118th Congress

However, the 2022 election results were much more mixed. Democrats retained control of the Senate, winning 50 seats in the chamber so far. Senate races in Alaska and Georgia both will proceed to runoff elections. In Alaska, the two candidates in the ranked-choice runoff with the most votes are both Republicans, giving the party 49 seats. In Georgia, the runoff election between Democratic Senator Raphael Warnock and Republican challenger Hershel Walker is scheduled for December 6, 2022. In the House, there are 3 races still uncalled but Republicans will have the majority, with at least 218 seats and as high as 221 to a Democratic minority of 212-215 votes. 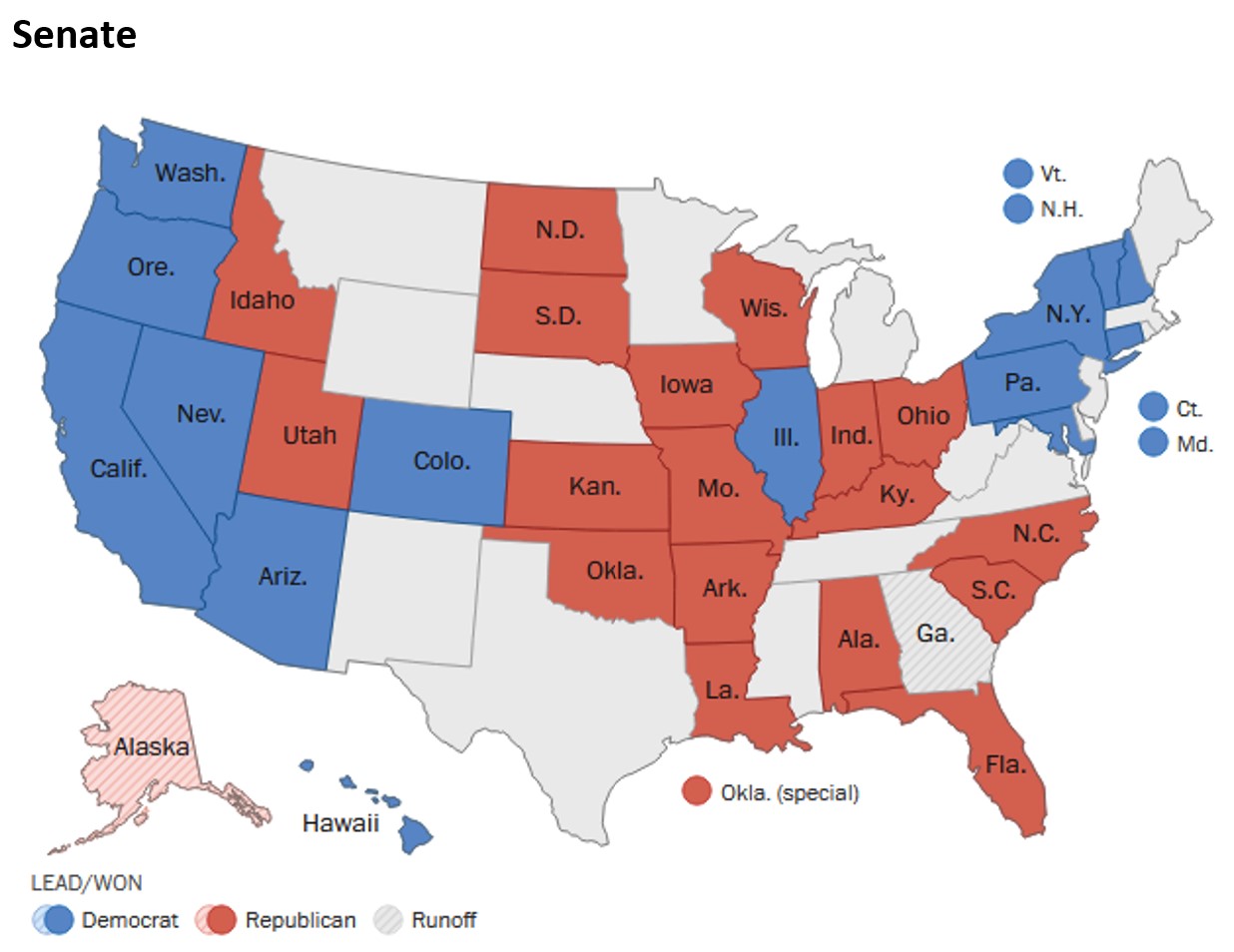 2022 Ballot Initiatives on Health Care
In some states, health care was on the ballot. Most notably, South Dakota passed a state ballot initiative amending the state constitution to expand Medicaid eligibility. Oregon amended its Constitution to add that the state “ensure that every resident of Oregon has access to cost-effective, clinically appropriate and affordable health care as a fundamental right.” And Arizona passed a proposition that reduces maximum interest rates on medical debt from 10 percent to no more than 3 percent annually and increases the amount of assets exempt from debt collection.

Impact of Election on Remainder of the Year
At the federal level, Congress now enters a packed lame-duck session. Before December 16, 2022, Congress must act on government funding for all federal programs for Fiscal Year 2023, as well as annual defense authorization and a number of other “must-pass” priorities that matter to outgoing Members of Congress. Starting work on this package has been delayed until it was clear which party would control the chambers next year, so there are few details that have been released so far. We are closely monitoring this work and will both advocate around any relevant issues for HTCs and bleeding disorders patients and will update members as things wrap up for the 117th Congress.

The other thing happening now is Congress getting organized for the new Congress that will begin in January. Even separate from the shift from Democratic to Republican control of the House, there will be a number of new Committee chairs and ranking members throughout the House and the Senate, each of whom will come with their own priorities for their work. We will update members as all of this gets firmed up and as we refine our advocacy strategies for next year.

Also in this Issue…